The Great Transmission explores the remarkable journeys Buddhist knowledge has made in
the course of its 2,500-year lifespan. It meditates on the fragility of knowledge in the face of
global events and asks the crucial question: What is the future of this ancient wisdom?

What does it take to keep ancient knowledge alive? Tibetan culture has deep roots, but the turmoil of the 20th century has left its vast text tradition in jeopardy.

This is a story of a historic act of cultural preservation, chronicling one refugee lama's lifelong efforts to preserve, print, and return to his people, the sacred books that are their precious heritage.

His work unfolds against the backdrop of a centuries-long tranmission, acorss continents and generations, upholding a legacy of transformative knowledge that dates back to the time of the Buddha.


"This educational video will be of great interest to anyone interested in a historical transmission of Buddhism from India to Tibet and in the ways in which Tibetan Buddhists have preserved the Indian heritage of Buddhism to this day. The video is insightful, visually beautiful, and ideal for classroom purposes."


"A vivid and compelling account of the heroic struggles of Tibetans to save their Buddhist culture, an ancient wisdom tradition that has much to offer us today. As an economics professor, I think massive free distribution of sacred texts - 4.25 million to over 3,000 Tibetan centers of learning in exile - provides an essential tool for preserving and transmitting Tibetan Buddhism. The unprecedented scale of the free distribution of essential texts provides an outstanding example of Buddhist altruism writ large in the 21st century. The film is a powerful testament to how Tibet's endangered culture can be supported through visionary actions utilizing the technological resources, volunteer spirit and above all, religious freedom in America."


"A wonderful overview of Buddhism in India, its dissemination in Tibet, its flourishing among exile Tibetans, and the role that Tarthang Tulku and his disciples have played in the preservation of Tibetan religious literature. The Great Transmission is an inspiring and cinematographically beautiful film that gives us glimpses of Buddhism at some of its most important historical moments."


"A visually stunning and informative account of Buddhist history and the ongoing life and lives of Buddhist transmission."


"The Great Transmission is a visually stunning journey through historical sites in India where the Buddha’s teachings were first transmitted and underscores the importance of continuing the transmission for new generations of Tibetan Buddhists in Asia and the West. The film highlights the important work of Tarthang Tulku in publishing new editions of Tibetan Buddhist texts and distributing them to western academic libraries and Buddhist institutions. Most importantly, the film’s footage of masters teaching students, students studying texts and engaging in debate succeeds in showing how the preservation of texts is integral to preserving Tibetan culture."


"The Great Transmission deservedly draws attention to Tarthang Tulku's unique and by now legendary engagement with Dharma texts. The sheer scale and scope of his collecting, printing, publication and distribution of Dharma texts is, as far as I know, unprecedented in modern times.Yet such activity is also very much an age-old Buddhist tradition, and we even see evidence amongst the Dunhuang texts of the ancient Tibetan Emperors engaging in similar activities, for example, in their commissioning of numerous copies of the Perfection of Wisdom and Amitayus sutras."


"This beautifully shot and animated documentary introduces the literary heritage of the Tibetan Buddhist tradition and the tireless efforts of the Tibetan master Tarthang Tulku and his organization to preserve this heritage and disseminate its texts to Tibetan Buddhist communities across Asia. In the unlikely location of the Central Asian plateau with its forbidding climate, the Tibetans produced a vast corpus of literature—including precise translations of practically the entire body of Indian Buddhist literature that was circulating in and after the eighth century. By its sheer scale, sophistication, and philosophical depth, this literature must be reckoned as one of the greatest achievements in the history of mankind.

The documentary portrays the material production of Tibetan Buddhist texts, a history which stretches from traditional manuscript scribing and illuminating, to woodblock printing, and continues into in the 21st century with modern state-of-the-art printing technologies. Supported by interviews with experts, the film also introduces key tenets of Buddhism and its history. But the central theme of this moving film is Tarthang Tulku's vision that texts are at the core of Buddhism and its transmission, and that their preservation and distribution is critical for the survival of Buddhism in the modern world."


"A wonderful film about the central importance of books to the practice and survival of Tibetan Buddhism. Combining stunning footage with inspiring animation, the film's narrative traces the movement of Buddhism and its books from their original transmission into Tibet in the 8th century, through the 'later dispensation' that followed Tibet’s so-called Dark Age in the 11th century, to the modern transmission of Buddhism out of Tibet and into the western world. The remarkable efforts of Tarthang Tulku and his followers are particularly highlighted as projects that have adhered closely to the precedents of Tibetan history even as they have made use of new, modern publishing technologies."

Jake Dalton, Associate Professor and Chair of the Department of South and Southeast Asian Studies, University of California, Berkeley


"The script, archival photos, the 3-D historical constructions, the music and the message were extraordinary. Bravo to the whole team!"


"A terrific introduction to Tibetan book culture and to the centrality of Buddhist literature in monastic life. The tales of transmission of Buddhist texts past and present deserve to be told to a broader audience. The beautiful cinematography and clever graphics bring these important stories to life in a lively, accessible manner."

Kevin Vose, Associate Professor and Chair of the Religious Studies Department, College of William and Mary


"With its beautiful photography, sensitive editing, and gentle pace, it is a kind of meditation. Thoughtful and inspiring."


Our main story challenge was to give depth to the history and tradition of sharing knowledge in the Buddhist world, while creating a vital context for the preservation activity taking place today.


Thai animator Phanuthep Sutthithepthamrong joined the Guna team in early 2014. His skill and drive opened up an entirely new set of storytelling possibilities for The Great Transmission, allowing us to produce sophisticated and affecting 3D visuals of key moments in Buddhist history. 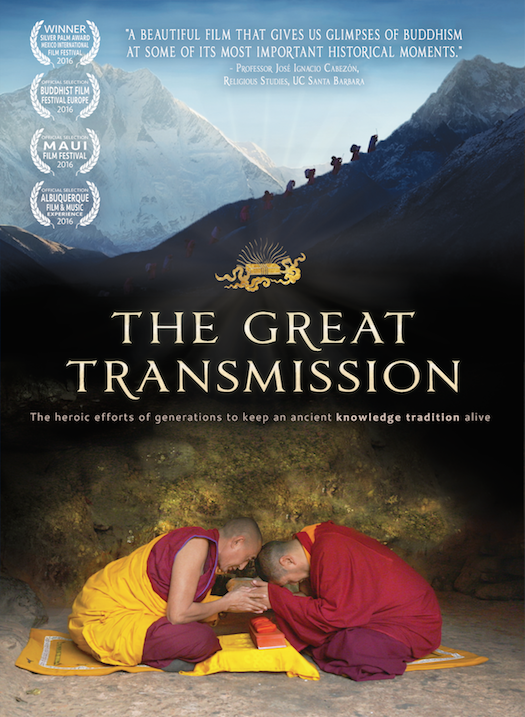 Purchase orders from qualified institutions may be sent to contact@gunafoundation.org. Our Federal ID #: 23-7072008. Terms are net 30 days from ship date.

All educational sales are for non-commercial, non-broadcast use. For inquiries about public screening rights or telecasts, please contact us at contact@gunafoundation.org. DVDs are leased for the life of the DVD. Once purchased, DVDs are licensed for direct projection only by the acquiring institution. All films and DVDs are protected by United States copyright law. Duplication, reproduction, alteration, subleasing, television (broadcast, cable or close circuit), public screening, or commercial use (i.e., charging admission) is strictly prohibited without written consent from the Guna Foundation.

A site/local streaming license grants a purchasing institution (the Licensee) the rights to encode digital streaming files in any file format from any DVD or VHS cassette already purchased from Guna Foundation (or purchased at the same time as the license). For a period of 3 years from the purchase date, licensees may deliver the contents of these files via password-protected digital streaming only to registered students, accredited researchers, faculty and staff of that institution. Files may be used for in-class instruction, inclusion in course management software, library research, extracurricular activities, public performances (provided admission is not charged) and any other activity directly administered by the licensing campus. Content of the files (the video program) may not be altered or edited in any way. The licensing institution must guarantee a password-protected environment without the ability of a user to download the program.

Licensees may not telecast, cablecast or deliver from any website open to the public any content licensed under this agreement nor may they lend, rent or donate any of the licensed content to another organization or campus for use in activities. Films licensed for institutional use may only be shared within any single, geographically unified campus. Sharing of streamed Guna Foundation content between two or more campuses, or with other institutions, or with individuals, classes or groups who are not specifically affiliated through employment or enrollment with the licensee is not permitted without the express authorization of Guna Foundation.


Pricing: 3-year site/local streaming licenses cost the same as the full, non-discounted price of a DVD licensed for your type of institution.